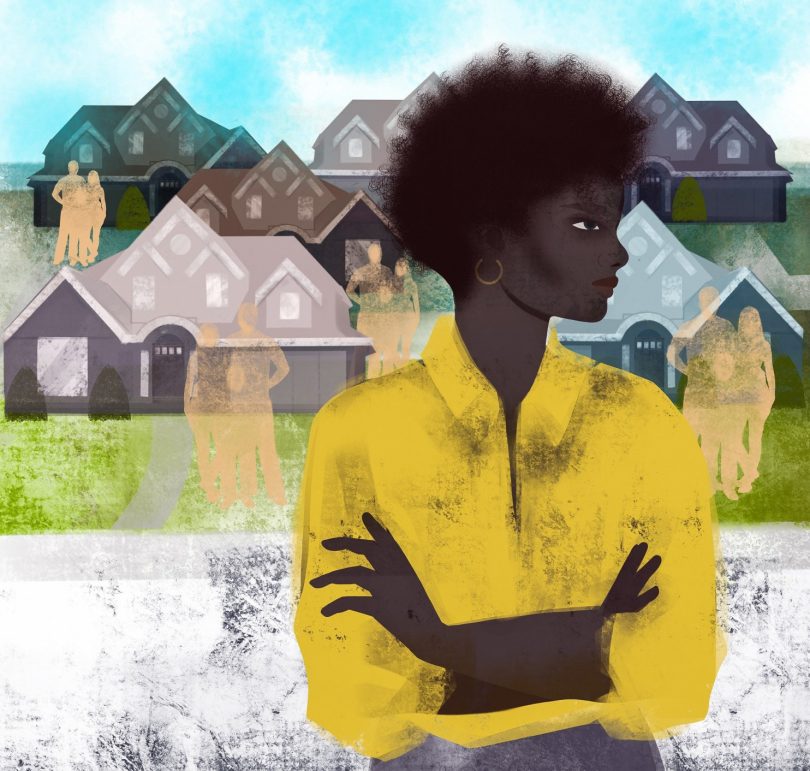 Shopping for my first home has been an exploration in the fraught intersection of race and class. All of the housing workshops and research that filled my evenings and weekends did not prepare me for the complexities of buying a house as an African American.

When my husband and I moved from Washington to central Connecticut a year ago, I was not thrilled about leaving the city but took comfort in knowing that we could finally afford to buy a house. Real estate in our new home town is a fraction of the cost of houses in the District, even though the property taxes are steep.

We decided to rent for a year to get to know the area and save more money for a down payment. We wanted to stay close to the city. For months, we drove around neighborhoods, mapping out nearby amenities, researching schools and calculating commute times.

Just beginning the home-buying process can be a hurdle for some minorities. In a recent Redfin survey, 45 percent of minority buyers asserted that sellers and their real estate agents “may have been less eager” to do business with them because of their race.

My ideal was a majority-black, mixed-income community, somewhere I wouldn’t have to worry about anyone feeling threatened by my husband walking the neighborhood.

When I was growing up in Greenbelt, Md., police were overly aggressive in stopping kids in their own yards. But the black enclaves in other parts of Prince George’s County where my friends lived seemed like a haven. We could play in front of their houses without being harassed.

And I was awed by the black doctors, scientists, electricians and plumbers carving out their piece of the American Dream. It opened a world of possibilities for me, and I imagined it would do the same for children I’d have in the future.

But that kind of community did not exist anywhere near our city in Connecticut. The nearest neighborhood that fit the bill was a small town and would have added 20 minutes to my husband’s commute. And I started to worry that buying in a predominantly black community would be an expensive gamble.

Studies have shown that homes in black neighborhoods don’t gain as much value as those in mostly white communities. One report out of Brandeis university pegged the problem to white home buyers shunning neighborhoods with even a modest black population, which depresses housing demand, drives down prices and stifles appreciation in those communities. Another study found that even wealthy minority neighborhoods had less home value per dollar of income than wealthy white neighborhoods.

For instance, though prices are rising in Prince George’s County after it experienced disproportionately higher foreclosure rates during the recession, home values there are still among the lowest in the D.C. region.

“Because whites are the primary purchasers in the home-buying market their preference dominates the market,” said Dorothy Brown, an Emory University law professor who has studied the issue. “They are generally uncomfortable living in communities that are not all white, or almost all white.”

She said that when more than 10 percent of families in a neighborhood are black, home values fall because the community becomes less attractive to white buyers. That sort of anti-black sentiment is even pervasive among other racial or ethnic minorities.

Sociologist Camille Charles at the University of Pennsylvania has written about Latino and Asian homeowners preferring few black neighbors in their communities.

“They internalize the same racial hierarchy that says blacks are always the least desirable group,” she said. “Latinos and Asians are more likely to draw a neighborhood with no black people in it but [that] might otherwise be integrated.”

Minorities also understand that white neighborhoods are afforded more amenities and reliable public services because of that same racial hierarchy, Charles said. Yet the greater the exposure to discrimination, she said, the less minorities are willing to live in predominantly white neighborhoods.

In the end, we focused on two communities in central Connecticut. One neighborhood is renowned for its public schools, a key selling point as we plan to start a family. The other is a historic district on the edge of the city, with stately Victorians bookended by two universities.

Both communities are home to college-educated, middle-class families, but neither had quite as much socioeconomic diversity as we would have liked. We spotted more black and brown faces in the historic district, although white families still make up the majority of the population. The racial diversity, albeit limited, was attractive, but the school ratings in the other community won us over.

We narrowed our search to houses near the top-rated school districts, which all happened to be in the least-diverse neighborhoods. It was a difficult decision, but we figured that as long as there were a few students of color our future children would be fine. That belief changed after we attended a few open houses. To continue to read the complete story, click here.