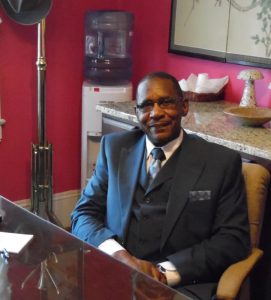 One key to his success, Cooper says, is having a passion for the real estate business and a genuine desire to help people. “If you get into this business just to make money,” Cooper explained, “you are making a mistake. You have to love this business, and you have to be motivated to help people realize their dream of home ownership.”

Cooper also attributes his success to his faith in God and the support and assistance of his wife, who is also a licensed real estate broker but focuses primarily on keeping the books and managing their Waughtown Street office.
In recognition of his decades of achievement in the real estate business, Cooper was recognized by his peers in 2013 when he was elected to the Board of Realtors Hall of Fame.

“Back then (in the mid-70’s), the doors were just not open for a black real estate agent to get into this business.”

As Winston-Salem’s first African-American realtor in the mid-seventies, things got off to a slow start for Cooper. “Back then, the doors were just not open for a black real estate agent to get into this business,” he recalls. After a brief stint working for a majority-owned real estate firm, it quickly became clear to Cooper that he would be better off on his own. “I used the three-week period working for the firm,” Cooper says, “to learn the ropes.” With this brief education in the fundamentals of selling and buying real estate, Cooper was off and running with his new career direction.

“My first office was in the living room of our home,” Cooper remembers. After joining the board of realtors in 1977, he made the most of a strong work ethic and his determination to prove to himself and others that he could be successful. “I grew up picking cotton in South Carolina,” Cooper notes, “so I was no stranger to hard work.”

By focusing on low- and moderate-priced residential properties in East Winston, Cooper was able to achieve some early successes and gradually build his business over the years. 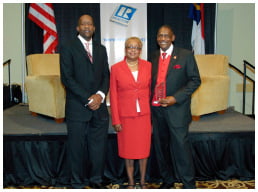 Mr. Cooper, right, was inducted into the Winton-Salem Regional Association of REALTORS® in 2013

Another important factor in his early success was gaining the knowledge that enabled him to do the research required to pre-qualifypotential buyers. “I dealt with many buyers who had been turned down by the major lending institutions,” he said. By examining their credit history and current income and comparing those factors to what he knew lenders were looking for, Cooper was able to match buyers and lenders in much the same way that loan officers function today.

“I had to have a thorough understanding of what each lender was looking for,” Cooper said. “That meant knowing their lending policies inside and out.”

It’s easy to get discouraged during difficult times, but I always try to remember that you can’t climb a hill without breaking a sweat.”
Cooper has seen lots of changes in the real estate business in his more than four decades, but many of the fundamentals remain the same. “Almost all buyers still focus on bathrooms and kitchens,” Cooper said, “so sellers are wise to pay extra attention to those rooms if they want to get a good return on their investment.”

He has also seen strong growth in Winston-Salem’s Hispanic market in recent years and makes certain that he has the bi-lingual capability in his office to work with this increasingly important segment of the market.

Asked about how he survived the real estate downturn that began in 2008 – a period often referred to as America’s second great depression — Cooper says he actually thrived during these hard times for almost everyone else. Through some good fortune and his many years of experience in real estate, Cooper was able to become one of only two local real estate agents authorized to handle foreclosures for The Federal National Mortgage Association (Fannie Mae). “Other realtors were leaving the business and changing careers, but I was handling 65 or 70 foreclosed properties for Fannie Mae.” It was hard work, he recalls, but it helped his company remain profitable when most others were hurting.

“It’s easy to get discouraged during difficult times,” Cooper notes, “but I always try to remember that you can’t climb a hill without breaking a sweat.”

John Singleton attended Temple University, where he graduated with a Bachelor of Science degree in journalism. He has worked as a reporter and for several major corporations, including Reynolds American, Inc., where he retired as communications director after a 22 year career there. John currently serves on the board of directors of the North Carolina Black Repertory Company and on the fundraising committee of the National Black Theatre Festival in Winston-Salem, N.C.